Literally, "Danish tax", Dane-Geld refers to a tax used to pay off Viking raiders in order to avoid them destroying the land. [Wikipedia]. It is also often used to refer to any act blackmail

This poem by Rudyard Kipling describes what happens what nations think it's better to pay off evil than to stand and fight. It is quite appropriate for this day when nations routinely pay off other nations because they don't have the stomach to fight for what they know to be right.

It is always a temptation to an armed and agile nation
To call upon a neighbour and to say: --
"We invaded you last night--we are quite prepared to fight,
Unless you pay us cash to go away."

And that is called asking for Dane-geld,
And the people who ask it explain
That you've only to pay 'em the Dane-geld
And then you'll get rid of the Dane!

It is always a temptation for a rich and lazy nation,
To puff and look important and to say: --
"Though we know we should defeat you, we have not the time to meet you.
We will therefore pay you cash to go away."

And that is called paying the Dane-geld;
But we've proved it again and again,
That if once you have paid him the Dane-geld
You never get rid of the Dane.

It is wrong to put temptation in the path of any nation,
For fear they should succumb and go astray;
So when you are requested to pay up or be molested,
You will find it better policy to say: --

"We never pay any-one Dane-geld,
No matter how trifling the cost;
For the end of that game is oppression and shame,
And the nation that pays it is lost!"

Rationalist Judaism: The Prince of Egypt

Rationalist Judaism: The Prince of Egypt
By Nathan Slifkin

... there is one major theme in the movie which, while it probably grates on the sensitivities of some Orthodox Jews, is an important part of the story ...

WTOP: Some Common Cold Remedies May Not Work

Some Common Cold Remedies May Not Work

A cold clears up in about 10 days no matter what remedies you take or don't take. So just save your money and admit that you're going to be sick for two weeks.

... Sen. Bernie Sanders, a self-styled socialist, who spent nearly nine hours on December 10 excoriating affluent Americans. Sanders complained to colleagues that “when the rich get richer ... they say: ‘I am not rich enough. I need to be richer.’ What motivates some of these people is greed and greed and more greed.”

...
How do the rich behave absent government coercion?
...

Among these multi-millionaires, 98.2 percent contributed to charity, versus just 64.6 percent of the general population. The wealthy typically gave away about 8 percent of their incomes in 2009. This figure has slipped as the economy has slid. In 2007’s survey, the rich donated between 9.3 percent and 16.1 percent of income.

The Center on Philanthropy researchers valued each hour of voluntarism at $20.85. So, the average rich American’s 307 volunteer hours equaled $6,400.95.

Read the linked article for the rest of the details.
Links to this post
Email ThisBlogThis!Share to TwitterShare to FacebookShare to Pinterest
Labels: commentary, politics

The U.S. and its allies are struggling to contain the damage caused by WikiLeaks, but there’s one country that needn’t worry much and can actually look at the disclosures as positive publicity: Israel.

The documents show that the threat from Iran is not an illusion conjured up by the Zionist lobby and that Israel is not the imperialistic aggressor seeking to dominate and brutalize Palestinians as the country is so often characterized.

If you haven’t heard the shocking news, here it is: Last Wednesday Humane Society of the United States (HSUS) CEO Wayne Pacelle told the Atlanta Journal-Constitution that convicted dog-fighting kingpin Michael Vick "would do a good job as a pet owner." It was a slap in the face to animal-loving Americans from the president of a group whose very name suggests a deep and abiding concern about dogs and cats. (Why would Pacelle and HSUS side with a violent felon over his furry victims? A $50,000 check from Vick’s Philadelphia Eagles team might have something to do with it.)

After deciding once and for all that Facebook is far too much of a time-suck, and that their habit of removing stuff I like to use is making the site less and less fun, I've disabled my account. Maybe I'll turn it back on again someday. Or maybe not.

If you're interested in the serious stuff (mostly political rants, occasional bits of tech news) I've been posting there, you can find them here now.

If you're interested in reading my silly stuff (comics, humor articles, etc.) that I've been posting there, you can find them over at my LiveJournal page

Microsoft is obviously getting scared of Apple's market share. Their Windows 7 site now has a page devoted to comparing Macs against PCs. Some of its points are valid, some are half-truths, and some are complete BS.

Here's my point-by-point analysis, for anyone who cares.

And They Said The iPad Didn’t Print!

There, I Fixed It posted this wonderful photo of an iPad on a copy machine as a joke for a printing solution.

Although this was clearly intended as a joke, it begs the question about why today's portable devices can't print. Lots and lots of portable devices have Wi-Fi network access. It's not that hard to scan for and send to a print server or a network-attached printer.

Now, you obviously don't want to load your phone up with large amounts of printer drivers. That would bloat the system and probably make it unstable. But there's no reason why you could ship with two or three generic drivers - plain text, PostScript and maybe PCL. With PS and PCL, you'd be able to reach most laser printers, and plain text would reach almost everything else.

And if you don't have a compatible printer at home, you can set up a computer to be a PostScript print server, translating the content for printing. Linux and Mac OS X have this capability built-in via the CUPS printing system. Windows users can use Ghostscript to create a virtual PostScript printer to do the job.

While I wouldn't want everyday users trying to manually set up a Ghostscript print server, there's no reason why a phone/PDA vendor couldn't make a convenient installer available as a free download.

How stupid do scammers think you are?

For some stupid reason, I decided to read a message in my spam folder. You've got to be the dumbest person on Earth to fall for this scam.
Read more »
Links to this post
Email ThisBlogThis!Share to TwitterShare to FacebookShare to Pinterest
Labels: commentary, scam, spam

What if Flash became an open standard?

John Gruber's excelent Daring Fireball blog has an article entitled What if Flash Were an Open Standard?. In it, he cites a Dave Winer article, which (among other things) proposes that Adobe open up Flash for all to support and implement

That’d be an interesting move, and it would certainly shake things up. But what if the source code to Flash Player is — as many would wager — a huge steaming pile of convoluted C++ horseshit? It’s sort of like what if Microsoft open-sourced the Internet Explorer rendering engine. It’s not like anyone who is now using WebKit or Gecko would switch to that just because it was opened — or that WebKit, Mozilla, and Opera would suddenly be obligated to or even interested in adopting IE-specific web features.

I think this makes a strong point, but it should be noted that this wouldn't be the first time. When Netscape decided to release their code into open source, forming the Mozilla project, that code was also a tangled mess and very difficult to maintain. But there was a hard-core team of developers dedicated to improving it, and they did just that. They ripped out and replaced most of Netscape's own rendering code, creating the Gecko engine instead. They replaced the UI code with the Chrome/XUL system that allows almost infinite flexibility with the UI skins, etc.

I think that for something as popular as Flash, the open source community would make a similar effort to improve Adobe's code, eventually producing something with more features, more utility, more speed, and better maintainability.

As for Apple, it could choose to be a part of such development, or it could choose to strike out on its own, using the specs of the SWF format. Apple could develop its own SWF player in the way it feels is best, either releasing the code to open source or keeping the source closed.

In theory, Apple could do this today, since Adobe already publishes the SWF file format spec, but to do this now would be a losing proposition for Apple. Today, Adobe doesn't release these specs until after they ship new versions of Flash, so Apple would forever be playing catch-up. And Adobe is not going to document their bugs - places where they violate their own standard and may or may not ever get around to fixing the code.

But if flash becomes an open standard, then the spec doesn't get modified behind Adobe's closed doors. Instead, there are working groups and mailing lists. Apple (and anyone else who is interested) can join the working group and stay informed about new features. Apple can ship new features in its SWF player at the same time Adobe and everybody else ships players with those features.

I think this can be a win-win scenario for everybody involved. Even Adobe - they might lose their Flash monopoly, but with Flash becoming almost entirely marginalized in the mobile device market, that monopoly is probably going to lose its value pretty soon anyway. Better to take a leadership role in the new market than to sink into oblivion with the old market.

Gee, Apple's new iPad looks a lot like something out of Star Trek, doesn't it? And I think it actually looks better than Trek's PADD. 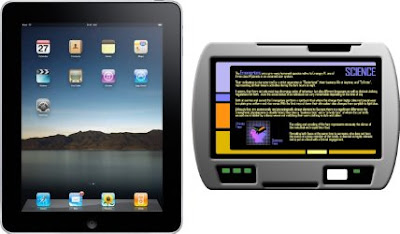