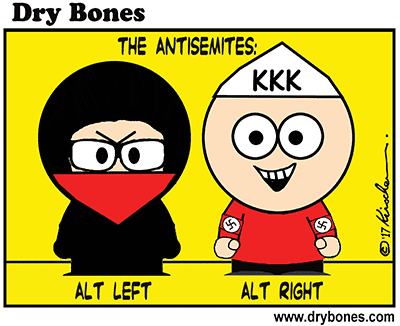 A really close friend from America was visiting us and saw this cartoon. He's politically savvy, sharp, and intelligent, but his reaction to the cartoon shocked me. He was unaware of the antisemitism of the left. He'd never heard of the violent antifa movement, and he was ignorant of the antisemitism of the Black Lives Matter organization. Most of his information comes from Main Stream Media and he's been guided by the politically correct stance of American Jewish groups.

I took the opportunity to sell him a copy of my brand-new Dry Bones anthology "Dry Bones Cartoons Fight Back." That led me to think that maybe I should be selling YOU a copy(either for you or for you to pass on to a similarly uninformed friend).

The book is on sale at Amazon http://amazon.com/author/kirschen where, in addition to the (over sized) anthology there's a Kindle copy (and a bookshelf of other Dry Bones books). And if you buy a copy PLEASE leave a review. It would be really helpful.

I normally don't like to repost someone's entire blog post, since I don't want to take traffic away from their site, but I think Mr. Kirschen's text makes an extremely important point. I'm including his plug for his new book in the hope that those people who don't click through to the original article will at least have an opportunity to support the author by buying one or more of his books.

ZDNet: AccuWeather caught sending user location data, even when location sharing is off

Popular weather app AccuWeather has been caught sending geolocation data to a third-party data monetization firm, even when the user has switched off location sharing.

AccuWeather is one of the most popular weather apps in Apple's app store, with a near perfect four-star rating and millions of downloads to its name. But what the app doesn't say is that it sends sensitive data to a firm designed to monetize user locations without users' explicit permission.

Security researcher Will Strafach intercepted the traffic from an iPhone running the latest version of AccuWeather and its servers and found that even when the app didn't have permission to access the device's precise location, the app would send the Wi-Fi router name and its unique MAC address to the servers of data monetization firm Reveal Mobile every few hours. That data can be correlated with public data to reveal an approximate location of a user's device.

We independently verified the findings, and were able to geolocate an AccuWeather-running iPhone in our New York office within just a few meters, using nothing more than the Wi-Fi router's MAC address and public data.

Shameful. I really like the AccuWeather app, but after reading this, it's gone. I'll be looking for some other app to get my weather reports now.

Giving an old Mac a new lease on life

This weekend, I upgraded my daughter's 2011 MacBook Air with a new SSD and battery and gave it a new lease on life. Although this computer is six years old, it still has no problem handling all the tasks she uses it for: web surfing, photos, Microsoft Office, music, YouTube and other related tasks. But after all this time, the 120G SSD is getting full and the battery only lasts about an hour on a full charge. The computer was also running a pretty old version of macOS - 10.7 ("Lion") was released in 2011 and hasn't seen an update since 2012. Because of this, several other key applications, including Firefox and Chrome were also old and out of date, and were in need of upgrades.